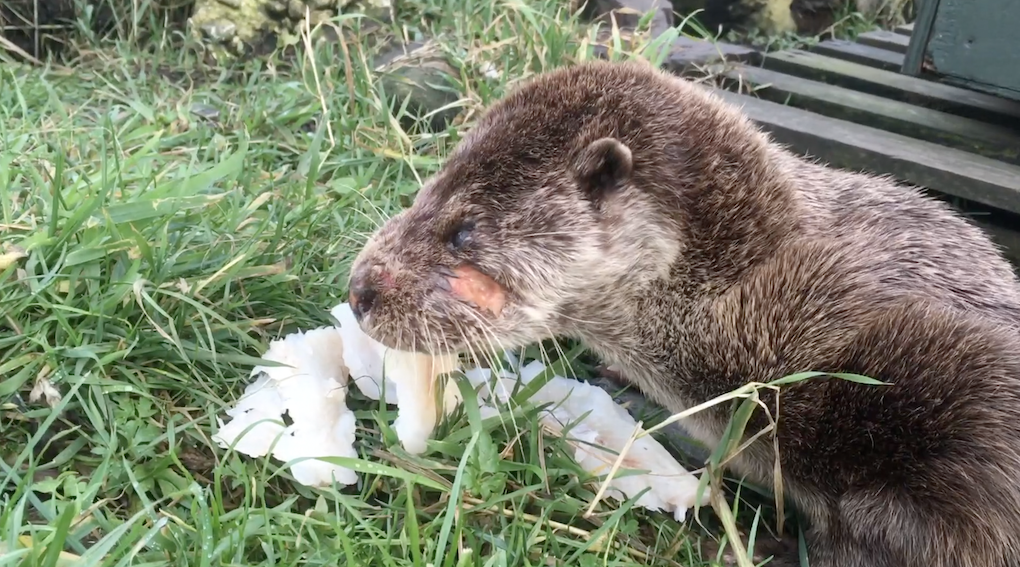 Just five days after arriving unconscious at the sanctuary having been found by two crofters curled up in their shed, half starved and with a horrendous wound to his face, Bobo the otter managed to make the next big step to healing and moved into an outdoor pen.

We were sure being out in the open air would give him a real boost, even though the weather turned and started to blow a hooley as soon as he was outside.

One thing we did notice was that his eyesight had improved – we could tell by the way he followed our movements as we filmed him. Later when we walked in to the otter unit and once again found him lying on top of his cage, we realised he needed to expand his territory. After all, he is a fully grown wild otter and they do not like being contained. So now he was over the worst of his injuries he needed to move on to the next stage.

The first thing he did when we let him out of his cage was to go for his food, of course, but then pretty quickly he started exploring, walking around the perimeter fence several times. We had to tempt him into his new hut with some fish, but once he found it he crawled inside and curled up in the fresh hay. Watching him wandering around really showed us what a poor state he’s in.

Hillswick Wildlife Sanctuary relies entirely on donations for the work we do. If you would like to help, please visit https://www.hillswickwildlifesanctuar…. Thankyou everyone for all your support. It means a lot to us.