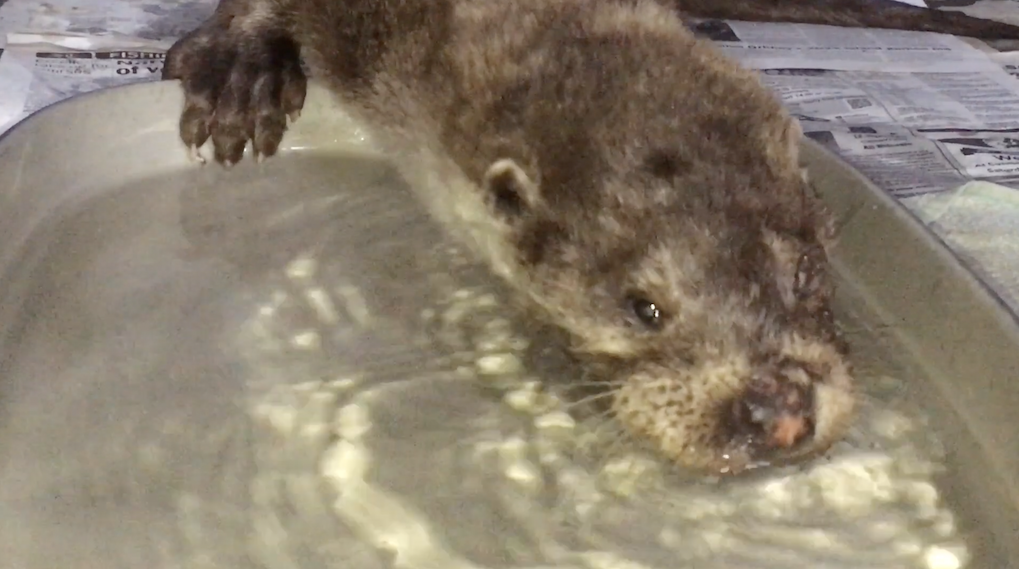 We took Bobo the injured otter to the vet the morning after he arrived. He was so low we were concerned that he might not even survive the 90 minute journey there and back. However Colin the vet thought the wound should heal, and managed to give him a seven day slow release antibiotic injection, which meant we could avoid putting him through the stress of being handled while his face wounds healed. When we returned we were very happy to see him eat fish and drink plenty of rainwater, but it was still a case of keeping our fingers crossed for this courageous creature. He was painfully thin, but what a magnificent tail!

The next day we found him sleeping peacefully in his cage. As soon as we put down his bowl of food he was up and out to eat and then started lapping his rainwater enthusiastically. He drank as much as he could, which was a really good sign. For an otter in his poor condition, water is just as important as food. It also looked as though his wound was starting to close up, partly due to the antibiotics no doubt, and he was beginning to get some energy back – so much so that by the evening we found him lying on top of his cage when we went in to feed him. If he continued to recover at this rate it wouldn’t be long before he was trying to climb out of his pen! We did have some concern about his eyesight, which seemed to have been affected by whatever happened to him. We just had to hope he would make a full recovery.

By the fourth day at the sanctuary, all Bobo wanted to do was drink and drink. He was more interested in water (we only gave him rainwater) than in fish, always taking a big drink before eating. Dehydration is always a major concern with a creature with this degree of starvation and he needed to drink as much as possible to deal with both his food and the antibiotics. So we just gave him a large tub of rainwater and watched him gulp it down. Still a long way to go, but his face wounds continued to slowly heal and he was showing more energy every day. Fingers crossed!