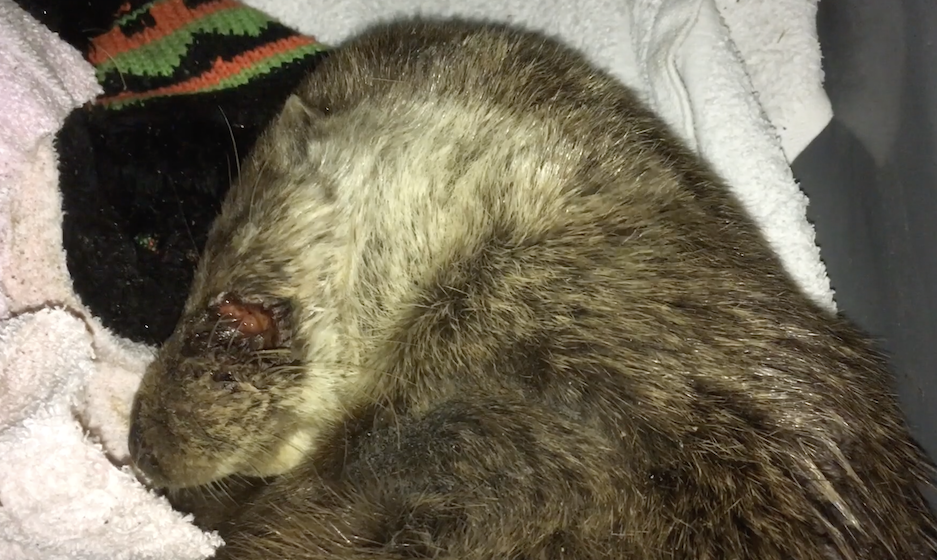 Davy and Kyle Henderson from Mossbank brought us this poor creature on 4 November. His name is Bobo. He was a fully grown male who had been wounded in a fight, the wound on his face had become badly infected. Kyle and Davy had been out fencing their croft by the Mossbank lighthouse and had left the shed door open. They returned to find Bobo curled up inside. He had obviously crawled into the shed while they were out, probably because it was a safe and warm place to die. He was completely lifeless when they brought him to Hillswick and barely moved when we put him in this cage, on top of a towel over a hot water bottle. But when we put some pieces of haddock beside his nose he stirred and grabbed one in his mouth. He was so weak though that he just lay there for a few minutes before he could summon the energy to eat it. Once he had started though, he just kept going. We managed to crush an antibiotic, dip a fish piece in the powder and watched him chew and swallow it. He dropped it in the bowl of rainwater we gave him, which means he got some fluid in him too, all of which will help. We couldn’t give him too much food straight away as he had clearly not eaten for a long time, and we had to avoid overloading his system. We weren’t sure even if he would make it through that first night.