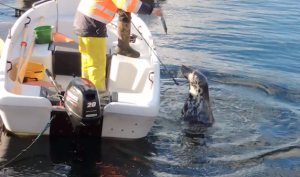 Last Tuesday we received a call from Karen from Mossbank who was greatly concerned about a seal who had befriended her fisherman father. Alan Henry had been feeding this grey seal from his boat at Toft pier for several years, but Karen said Mr Sealypants, as she called him, had fallen foul of a fishing line with hooks that had embedded themselves in his right front flipper and his lip. She asked if we could help.

Never ones to turn down an assignment no matter how difficult, the first thing we did was phone Stephen Marsh and Darryl Thorpe from British Divers Marine Life Rescue for advice about how to go about cutting free a fully grown adult grey seal from a fishing line. Firstly they warned us about how dangerous this could be, as even though the seal might be friendly towards Alan because he fed him, a group of strangers trying to catch him would be a very different story.

They advised the best thing would be to cut the line that was wrapped around his flipper and hooked into his chin, and not to worry about getting rid of the hooks as these would eventually rust away in the sea and the salt water would heal any wounds.

Going into action, the first thing we had to do was find the right tool to cut the line, so we approached our friend and keen fisherman Tom Jenkinson to see if he could help. Within an hour he came back to us with the perfect tool he had improvised from the safety cutting device he uses when he is out in his kayak: razorblades in a hooked plastic holder attached to a six foot long fishing rod. It was absolutely perfect for the job.

Fully equipped and with our plan in place, we met Alan and Karen at Toft pier at 7pm on Wednesday after he had been out to catch a few mackerel with which to tempt Mr Sealypants out of the water and distract him while we made the necessary cuts. With considerable trepidation, Pete climbed into the boat with Alan who held up a mackerel while Pete moved in with Tom’s improvised tool. He managed to cut the line at the first attempt, but another cut was needed to release the flipper. After a few more goes the seal was free as best could be – we could still see hooks stuck in his flipper and his lip with bits of nylon attached, but they were no longer tied together and it was great to see him able to move his front flipper freely.

Alan said he had hardly been able to sleep thinking about the plight of his friend, and it was lovely to see the smile on his face when the seal’s torment was over. He had told us the seal had obviously been very uncomfortable and been barreling round and round in the sea, behaviour he had never seen before as he tried to free himself from the line.

It’s hard to imagine a better feeling in the world than seeing a trapped wild creature released like this. A big thank you to every one who helped with this rescue, especially Karen and Alan, Stephen and Darryl at BDMLR, Tom and Sue, David Novotný and our two volunteers Ania and Max. A great team effort!

Rescuing a pilot whale from VidlinRescuing Rocky the otter cub