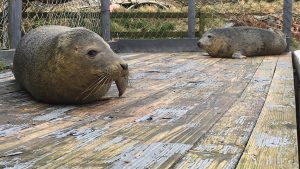 Sal & Gemma were a right pair of characters – and polar opposites, especially in their eating habits. While tiny Sal swallowed fish from the start without any problem, Gemma (the seal who was found wandering away from the sea on Bressay back in January) would tear the fish up and spit them out and then finally eat up the bits. What a mess she made! It added hours of work to cleaning the pool. We tried to teach her to eat whole fish, but she flatly refused to do it any other way. Despite her strange eating habits, she still managed to pile on the weight and both of them were ready to go last week. We chose a lovely day to release them at the East Ayre in front of the sanctuary. They both returned the following day and we threw them a few fish to help them on their way and we’ve not seen them since. It was the first time in many a year that we’ve chosen that spot now the local salmon farm has gone. We do hope they have found a nice sheltered place to weather this storm we’re having at the moment. Good luck girls!