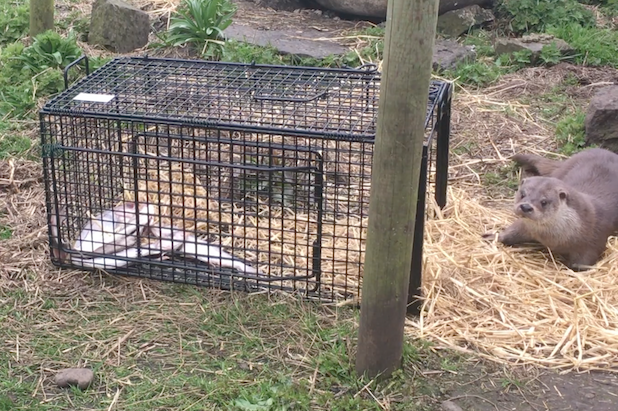 We decided to see if we could put our two young otters Oskar and Tivacudda together to add some spice to their lives. We’ve never done this before so we took advice from Colin Seddon from Scottish SPCA Wildlife Rescue Centre in Fishcross. He suggested putting them both in separate cages to see how they reacted to each other, while making sure they could not touch each other in case they fought. So we ordered two cages from Hamster Baskets in Herefordshire who very kindly made a special effort to make them and get them to us as quickly as possible so we could get on with the task. The first stage was to get them used to their cages to make sure they would go in them. This was no problem with Tivacudda whose natural curiosity meant it took no time for her to get used to the new addition to her pen. Within 24 hours she was happily eating her fish in it. Oskar, though, was a different story. His cage was an intruder not to be trusted, even when it had fish inside it he would snatch them and run off. It was not going to be easy to catch him! Watch out for tomorrow’s next exciting episode of Oskar meets Tivacudda!