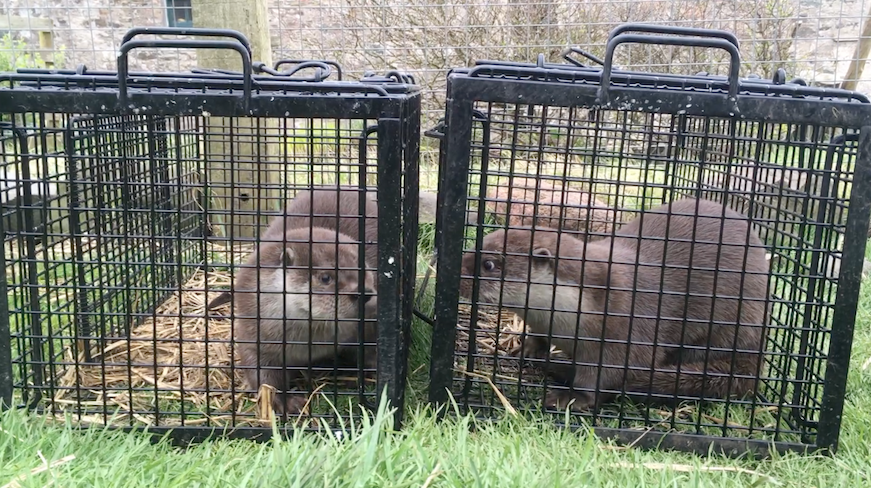 The big day arrived to introduce Oskar and Tivacudda to each other, but the first step was to persuade them into their cages…and the best way to do this was with a fish. As expected, Oskar was highly suspicious and came straight out to investigate, taking plenty of time before he ventured into the cage far enough to be trapped. More surprisingly, Tivacudda refused to leave her hut for ages and could only be tempted by having her curiosity piqued by shoogling the fish around with a stick.

We were on tenterhooks when we lifted Oskar into Tivacudda’s pen and laid the two cages side by side. What a beautiful sight it was to see them immediately take to each other, squeaking with excitement and dancing up and down their cages like mirror images of each other. Eventually Tivacudda settled down and ate her fish, and then some time later Oskar did the same and after about one hour they both simply curled up and waited to see what would happen next. The big question being: how will they get on when they are released together?

Once again a big thankyou to Hamster Baskets for supplying the wonderful cages and to Richard Riley for his camera work.

We make these videos to show everyone the otters we rehabilitate. We cannot show the otters to the public at the sanctuary, because we are working towards getting them back to the wild and it’s important they have as little human contact as possible. Seals, however, are a different story.