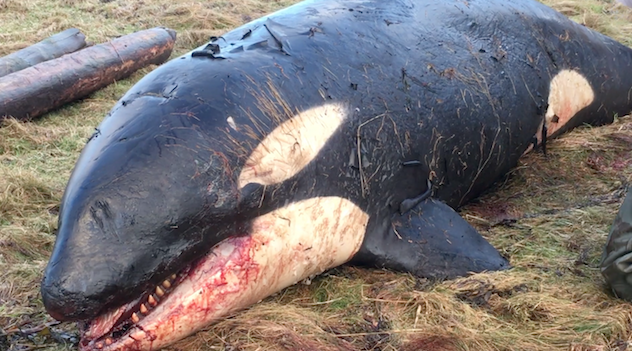 On 20 December we found out that the young male killer whale that we found stranded in Eshaness a weeks earlier had died after being thrown high up on the shoreline, yet another victim of ferocious Storm Caroline. Andrew Brownlow​ from Scottish Marine Animal Strandings Scheme​ carried out a post mortem with a small group of helpers on what proved to be a perfect day with clear skies above us, which was a miracle in itself considering the weather we had been having. It took Andrew and his Shetland team just three hours to dissect the whale and collect samples for analysis. By the end he concluded it had been a young juvenile, perhaps four years old, who was alive, healthy and had recently consumed a seal when he stranded in the sheltered bay at Hamnavoe, washed up by the 100mph hurricane that suddenly struck Shetland on the afternoon of Thursday 7 December. Such a sad end for one of the young orcas that have been inspiring whale watchers throughout these islands for the past couple of years. Local crofter Magnus Nicolson buried the whale, its skeleton to be recovered later for analysis and display, hopefully here in Shetland. Here you can watch Andrew and co in action as they work out the cause of death.

Tivacudda the otter lost her mum in the storm

Rescuing a pilot whale from Vidlin