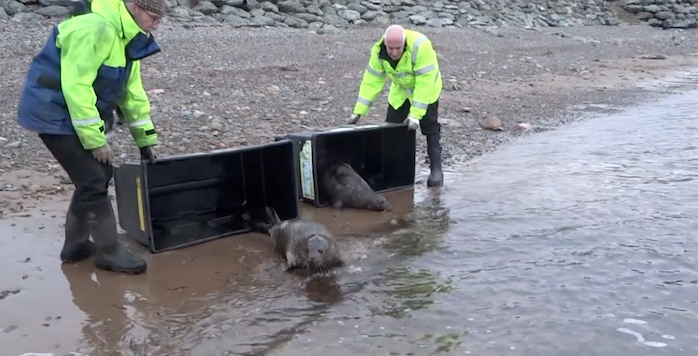 We finally released our two common seals Mimi and Rommy on 13 November 2017, five months after they arrived at Hillswick Wildlife Sanctuary. Normally our common seals are ready to go back to the wild by late September, but Mimi and Rommy came down with a terrible tummy bug in August that set them back for a good six weeks. It was only after three courses of antibiotics and advice from a fellow sanctuary to use the nutritional supplement Emeraid that they managed to get back on their feet…or rather their flippers. After they recovered there was no stopping them and by the time we set them loose in the sea they were big, fat and healthy. We just hope they are doing well in Shetland’s rough winter seas. November’s a bit late for common seal pups to face the wide ocean for the first time.

Snolda the grey seal pup from PapaReleasing Charlie the otter