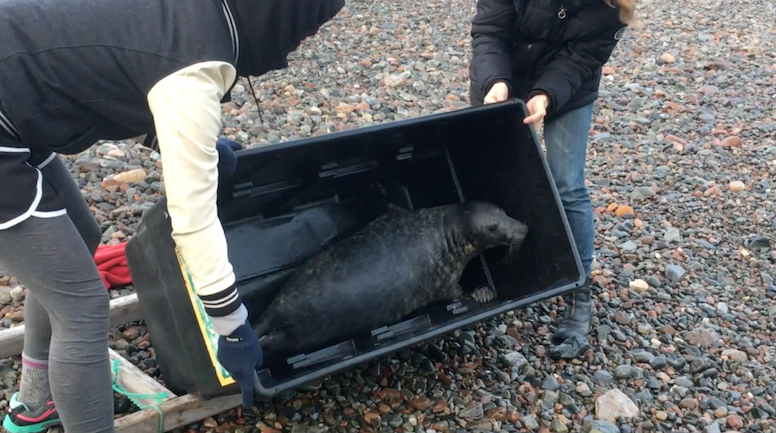 Snolda the grey seal pup came from Papa Stour in early December where he was found in a field. He had already been found in that same field the previous day and had just gone back after being carried back to the seashore. He was a big fat white coat then, having clearly been well looked after by his mother. After travelling over on the ferry to the Shetland mainland on the ferry Snolda (after which he was named), he spent a few weeks at the sanctuary, moulting his white coat and getting the hang of eating fish in the big pool, Snolda made it out to the ocean in early January with the help of Noella and Anna from Santa Cruz, California, who had been enjoying some cold weather in Hillswick over the festive season. Noella was a bit of a hero, running into the sea up to her waist to stop the black box used to transport Snolda to the beach from being taken by the waves. Thanks Noella!

Snolda seemed to still have a desire to head inland when we first tipped him out, and even after being encouraged into the sea he quickly turned around and aimed for the shore again. But on the second attempt he stayed in the water, racing along close in to shore before finally deciding that, yes, it did look more interesting out at sea. He’s been a big energy in the sanctuary and we’ll miss him, but there’s nowhere we would rather see him than riding those ocean waves. Have a good life, Snolda. We’re sure you will.