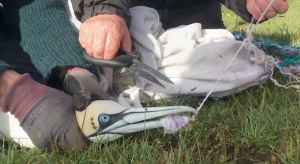 What an exciting afternoon we had last week when a young couple from Trondra, Richard Owen and Triin Tammsalu, knocked on our door to tell us they had seen a gannet in serious trouble on the East Ayre beach after walking around the Ness of Hillswick.

We went straight out to investigate and saw that the bird had a matted mass of frayed plastic rope wrapped tightly around its lower beak that trailed for more than a metre behind it. Goodness knows how long it had been there. Our initial attempt to rescue the gannet failed as it ran and flew off when we approached it, landing on the sea not far away. We felt absolutely gutted at having let it escape, knowing it would not survive so entangled. The thought of that was terrible. So we waited.

We kept an eye on it for the next hour or so, as it attempted to fly off but kept being dragged back down by the weight of the rope. Eventually it did come ashore again further away from us, walked onto the grassy bank behind it and then flew over to the next beach on the Ness.

Gannets are very nervous birds and having already frightened it on the beach, we knew we had to use great stealth to capture it this time around. We must have looked some sight as we crawled across the grass staying out of sight so it didn’t spot us as it walked along the beach and up a wee burn towards a grassy knoll, dragging the rope behind it.

We managed to get between the bird and the sea and then David and Pete slowly approached it from two sides and when they were close enough, ran towards it. David managed to step on the end of the trail of rope to stop it from escaping again while Pete threw a sheet over it to protect all of us from its dangerous beak. Jan joined in working on removing the rope, which was so tightly wrapped around the beak that it took several minutes to carefully cut away. Then we lifted the terrified bird back onto the beach. We were very concerned that the stress of the experience would have been too much for it, but we had no choice but to do what we did.

The gannet, known as a solan goose in Shetland dialect, was clearly traumatised by the experience and made no move when we released it. It was obviously in shock. We waited for ages and eventually left it to decide for itself when it wanted to go back to the sea, rather than cause any more stress by chasing it into the water. A couple of hours later we returned with some pieces of fish, but there was no sign of this beautiful bird. Although it was in a state of shock, it did seem reasonably strong so we hope that it will make a full recovery and join its fellow gannets soaring above the sea and diving like an arrow to catch its dinner.

Diving into the sea must be how this bird became entangled in this deadly length of plastic and demonstrates the horrors our birds and marine wildlife face with the amount of plastic rope and netting in our oceans – “ghost gear” as it is often called. It also shows how important it is for us to take full responsibility for what we throw away. This is what “away” can mean. And it makes you think of all the thousands of creatures that are not lucky enough to be found by the likes of Richard and Triin.

Meanwhile our appeal reached its latest target of 350 pledges on Friday night. We’re asking people to keep spreading the word to help secure the long term future of Hillswick Wildlife Sanctuary so we can carry on helping Shetland’s wonderful wildlife with our next target of 400 already in sight.

Looking back on 2017 at Hillswick Wildlife Sanctuary