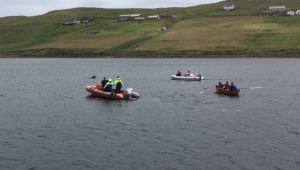 A pilot whale got into difficulty in Vidlin marina in July 2017. Hillswick Wildlife Sanctuary coordinated a rescue over three days after the whale was first reported behaving strangely close to some salmon cages in Vidlin Voe. The following day it threatened to strand on the shore, but two kayakers bravely and gently steered it away from danger. Then a man in a motor boat tried to scare it further out to sea, but unfortunately he only managed to scare it into the local marina where it briefly stranded on the slipway. On the third day Ryan Leith and Ian White arrived with two RIBs and with the help of Hugh Harrop we started guiding the whale out of the marina. Then three local lads James Johnson, Sam Nicolson and Paul Hunter turned up in the village rowing boat and between us we succeeded in getting the whale into deeper water and chased it out to sea. It was a great team effort!

Sadly the pilot whale we rescued from Vidlin marina ended up stranding in Basta Voe on Yell a week later. We did our best to float it out to deep water, but it chose not to swim away and later died. Andrew Brownlow from the Scottish Marine Animal Straning Scheme carried out a necropsy and found it had been suffering from a major brain infection for some time and he was surprised how long it had managed to stay alive in the wild.

Tivacudda the otter lost her mum in the storm