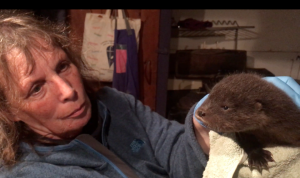 Our latest arrival turned up last night when we got a knock on the door at about 8pm just as we were sitting down for a late tea.

Jim & Ginnie Sandison from Urafirth had been taking their evening constitutional when they heard squeaking in the reed beds at the back of Urafirth beach. They went to investigate, but it was a bit too dark to see clearly. Then Martin Gilbertson came by in his car to see what they were doing and using his phone torch they managed to find this peerie fellow.

Martin came straight over to the sanctuary to alert us (it’s only a couple of miles away), so we grabbed a box, a towel and a pair of gloves and headed straight back to Urafirth to find him. The trouble was that by this time the otter had vanished back into the reeds, so it was another needle in the haystack job, even worse than Marrister last month. By now it was the dark of the night and we had to use torches to hunt for him among the thick reeds. We searched and searched (and had to keep telling Jim to be quiet so we could hear the otter squeaking) and eventually, by some miracle, Martin found him poking his tiny head out of the reeds under our feet. It’s a wonder we hadn’t stepped on him.

It was a cold night and very wet after a big rainstorm and he would never have survived the night on his own, so we brought him back to the sanctuary and laid him on a hot water bottle to warm him up. We managed to get a few drops of milk down him, and slowly but surely he came around.

We decided to call him Oskar after our grandson who was born last week in Glasgow. He’s the smallest otter we have ever had arrive at the sanctuary, no more than a couple of weeks old. He should not be out of the nest, but with the heavy rain we’ve been having he must have been washed out and lost his mum. He’s very lucky that Jim & Ginnie walked by and heard him last night.

We’ve reached our target – 500 pledges!Rescuing a pilot whale from Vidlin