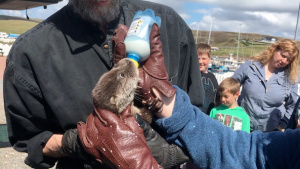 There was good and sad news last week on the otter front. Late on Saturday 10 July we received word of two otter cubs in need of help at the Skeld campsite, but no other information. We made contact the next day, but there had been no sign of them that day. Then on Monday morning we received a call from site manager Nadia asking us to come, so we dropped everything and raced down there.

Searching for the otters when we arrived at the campsite was like looking for a needle in a haystack. After about half an hour we were lucky enough to meet a couple from Sandwick – Gordon and Marilyn – who said they had heard what they thought were two cats fighting under their caravan the night before. They showed us where they had seen them run towards the rock armouring, so we walked in that direction and as we approached we heard that familiar high pitched whistle that frightened otter cubs use to say: “Help, where are you mum!”

We found one of the otter cubs curled up amongst the rocks, but as soon as we went to catch him, he disappeared under the rock armouring. We tried to tempt him with a piece of fish hoping the smell would entice him out from under a heavy boulder, but he refused to budge. So instead we blocked off all his escape routes with a towel, a net and a boot and then Pete reached his gloved hand into the one remaining exit and somehow managed to grab him and haul this frightened and angry peerie draatsie out from his hiding place. He was absolutely frantic, but with considerable effort we managed to get some Lactol down him and settle him for the journey back to Hillswick Wildlife Sanctuary.

By this time half of the campsite had come over to watch, so we formed a search party and looked high and low for the sibling. The sad news is that even after several hours we couldn’t find the other cub. We had been told one of the cubs had an injured leg, so the missing one may have just given up and gone into hiding. We spent the next few days hoping there might yet be a miracle and asked the people at the campsite to keep an eye and an ear out for the cub, but there has been no word.

We’ve named our new otter Rocky (for obvious reasons) – he’s a very feisty fellow and is doing very well so far despite losing his family. A big thank you to everyone who helped with the rescue – we could not have done it without you.