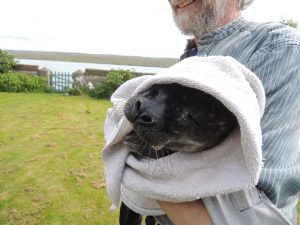 The common seal pupping season has begun one week earlier than usual at Hillswick Wildlife Sanctuary with the arrival of Rommy, an orphaned pup found on the beach outside their house in Sullom by Charlie and Jane Gallagher’s handsome black German Shepherd dog Rommel, after whom our first common seal of 2017 has been named.

Rommy is severely underweight and dehydrated, so we have been tubing him with Lectade rehydration fluid since bringing him to Hillswick and so far he appears to be in reasonable shape considering he must have been separated from his mother shortly after his birth, probably around five days ago as he has clearly only just lost his umbilical cord.

When we reached him he was so hungry he had been trying to eat beach sand and small pebbles. Luckily he’s a good-sized common seal pup and we’re hoping he will regain his strength over the next few days as we start to introduce him to marine mammal formula milk.

Charlie and Jane had kept an eye on him for 48 hours before calling us to make sure there was no sign of his mother, so it’s some time since he last had anything to eat.

If we’re going to be able to carry on doing this work into the future, we need your support. The oil industry and the council have pledged to invest £300,000 into the sanctuary to future proof all our facilities, but they insist we become financially sustainable first. This means 500 people pledging £5/month to support our work.

If you have already have pledged, many thanks for your support. If you can’t pledge, please encourage as many other people as possible to do so and help make sure we don’t miss this once in a lifetime opportunity.

Our appeal is located online at https://www.hillswickwildlifesanctuary.org/appeal/ – thank you all for sticking with us as we work to turn this dream into reality.