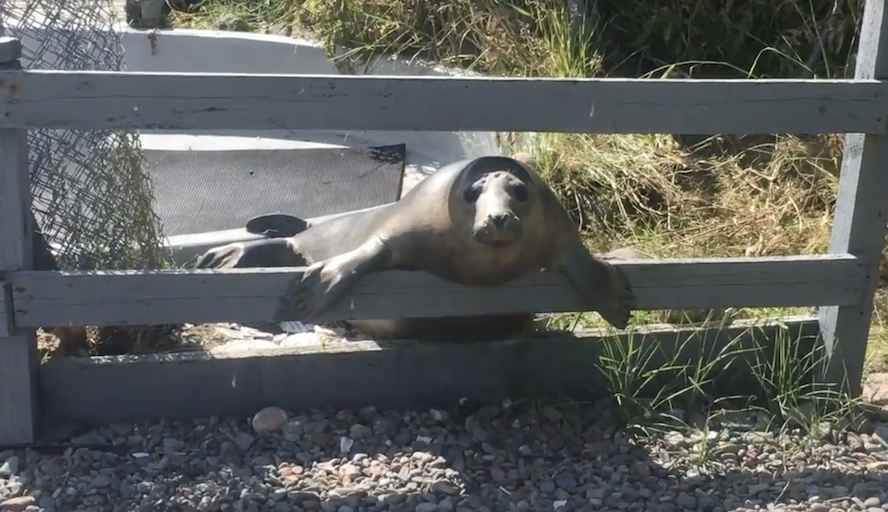 On Tuesday 24 July we finally managed to release Shooglenifty the grey seal, but it was a bit of an adventure. First we heard that a pod of eight killer whales was heading for Hillswick at lunchtime, and we didn’t want them having Shoogle for lunch! We were considering postponing the release yet again, but thankfully the orcas passed Hillswick by and swam straight on to Eshaness where we heard later they had eaten a couple of seals before moving on further north.

The next question we had been deliberating was how we were going to lift Shoogle out of the big tank where he’s been living for the past two months, recovering from nasty bouts of lungworm and sealpox. At nine months old and having spent the past few weeks gulping down 4kgs of herring a day, we reckon he must weigh at least 60kgs if not more. We weren’t even sure we could fit him in one of our seal transport boxes, let alone lift it.

As it turned out, Shoogle made it easy for us. We had removed part of the fence to avoid having to lift him over it (something that will be rectified when we redevelop the sanctuary). We were just gathering all the materials to fetch him, only to turn around and see he had already climbed out of the pool on his own and was now making his own way back to the sea.

So we grabbed a couple of wooden boards and with the aid of the broom we use to clean his pool (which he knws so well), we herded him across the garden, over the car park and onto the beach where he walloped down to the sea and took off, to the cheers of the onlookers who had come to see him return to the wild.

Many thanks to everyone who came to help, including Maxime del Piano, Alison Riley, Richard Riley and Jeff Gaskell, who had just come along for a chat about our plans for the future.