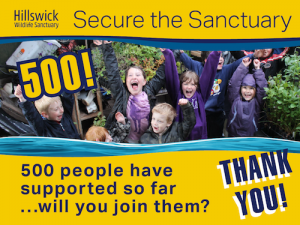 Hillswick Wildlife Sanctuary is absolutely delighted to be able to announce that we have reached our initial funding target of finding 500 people to pledge £5/month to support the long term future of the work we do rescuing, rehabilitating and releasing seals and otters into the wild.

We launched our fundraising campaign on 10 May as Dougie Henshall and the crew from the “Shetland” TV crime drama filmed a couple of episodes of the new series here at the sanctuary. We reached our target four months later in September, just in time for our 30th anniversary celebration supper dance at Sound Hall where we managed to raise a further £2,000, more than half of which came from an auction of some stunning paintings and photographs donated from all over the world.

We have been very humbled by the generosity and kindness everyone has shown towards our efforts to secure the future of the sanctuary. Reaching our target means that we have achieved our aim of demonstrating that we can sustain the sanctuary on a day to day basis. This was a condition we had to meet before we could receive a £300,000 investment from the Sullom Voe Association, who represent the oil industry and the local authority in Shetland.

That investment has now been secured, though it leaves us with the challenge of finding a further £100,000 to complete the development plan we have for the sanctuary.